A fire destroyed a two-family home in Fair Haven on Wednesday afternoon. 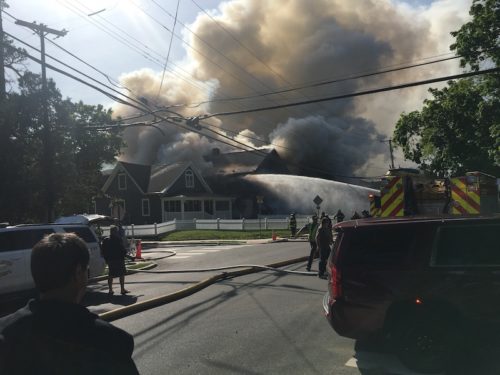 Firefighters trained water on the fire from multiple angles. Below is the scene on Thursday morning. (Photos by John T. Ward. Click to enlarge.) 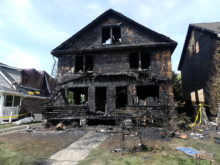 Francis Foderaro, 16, said redbankgreen he came out of his house three doors down to see “a tornado of flames literally twice the height of the house” and called her.

The fire quickly consumed the structure.

“I think within six minutes the whole house was engulfed in flames,” Brian Todd, who lives in the neighboring house to the south with his wife and two children, said on Thursday.

“The flames were rising and we thought our house would be gone, but the wind turned” to the north, he said.

Some siding in Todd’s house melted away, but the house remained habitable, he said.

The neighboring single-family home to the north at 174 Fair Haven Road, however, was damaged by fire and water and is temporarily uninhabitable, according to Police Chief Joe McGovern.

Dozens of volunteer firefighters from nearby towns of Red Bank, Little Silver, Rumson and beyond joined the effort. McGovern said the fire was under control around 6 p.m.

The cause of the fire is under investigation but is not suspicious, according to McGovern.

Borough residents began gathering to collect clothing and other necessities for displaced residents, and a GoFundMe account was planned, according to posts on the Fair Haven, NJ Facebook page.

If you enjoy the media coverage provided by redbankgreen, please become a paying member. Click here for details of our new free newsletter and membership information.