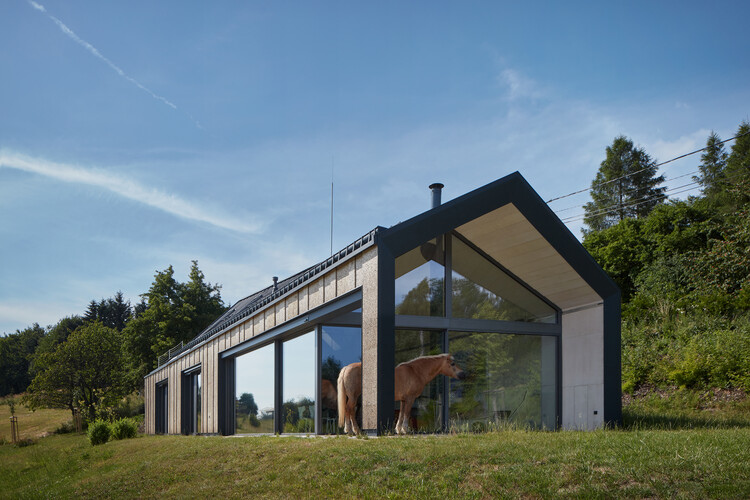 Text description provided by the architects. Rašovka’s family house is located on the southern slope of the Ještěd ridge, at an altitude of 600 m above sea level, with a magnificent view of the Bohemian paradise landscape. One of the main motives that guided the design process of the house was the view and the integration of the interior spaces into the landscape. The landscape is open, passable and dominated by unfenced flower meadows. The floor plan of the rectangular house of approximately 22.5 x 7 m is oriented along the contour line. Along the north side of the property there is a road on top of an embankment to which the house was to be connected. Part of the roof of the building is therefore passable, intended for parking vehicles. The ground floor and the main garden area are then 4.5 m below road level. Much of the building is covered by a pitched roof with a variable pitch ranging from 43° to 30° on the east gable. The slender mass of the house cuts diagonally across the steep slope of the road, and the ridge seems to descend into the garden.

The main entrance is on the west side. Access is via an outside staircase along a stone wall overgrown with vines. The otherwise compact massing of the house is completely open on the eastern gable, and its all-glazed wall recedes from the contour edge at an angle. This maximizes the view area and creates a covered patio. The terrace adjoins the south side, where there is another opening in the mass of the house over the entire height of the floor. The glazing joins the glazing of the east gable at two-thirds of the opening, without a corner column. The corner is formed by sliding gates which can be opened by sliding, so that the main living space becomes fully connected to the garden through the terrace. All the other living areas on the ground floor, including the bathroom, are also open to the landscape through bay windows on the south side.

The structured facade is made of Portuguese expanded cork planks of varying thickness, which alternate in vertical strips. This material has never been used in this way in the Czech Republic until now. The saddle roof is made of folded aluminum sheets in the color anthracite. The ceilings and surrounding walls were cast in exposed reinforced concrete, the interior partitions are in rendered bricks. The roof soffit is lined with bleached birch plywood, a pivoting cast iron French chimney hangs from the rafters, being the dominant feature of the interior. The overall simple look of the house is complemented by dark red-brown screed flooring. The exterior sidewalk is made of old, well-worn granite stones. They resemble the original Liberec paving with its specific pink color. Likewise, all of Liberec was once generously paved. This is how the whole project was born gradually – with respect for local traditions, history, materials and the environment.

The investors tell the story of the house as follows: “It all started with the discovery of the last building plot in Rašovka seven years ago. We already knew the place and since we wanted to build as high as possible in the direction of Ještěd mountain, we didn’t hesitate at all. We had many other elements in mind for a long time: glass walls, exposed concrete, an austere interior, metal elements, a hanging fireplace, or an open garden without a fence. studio SAD shaped the original ideas of iveta in the design of the house. As the idea for the house was born, we gradually realized that we simply could not compromise That is why the house is covered with cork and there is no column in the glass corner, despite statics and logic.A company with the thematically elegant name Ještědská stavební společnost (Ještěd /mountain/ undertaken se of construction) undertook the demanding construction, discovered a layer of black coal under the house, and finally, never Everything went well with the laying of the last granite stone in the paving.

“The interior design of the house with the interior layout of the rooms may have been created earlier than the house itself,” says Iveta Zachariášová, interior designer and co-author of the entire project, in especially from the inside. “Thanks to my many years of experience, a lot of things and functional aspects were clear to me from the start, and we basically only dealt with their alignment with the structure of the house and the opening of the house on the surrounding environment through glass walls. The light, space, cleanliness of the interior and the moderate use of colors led me mainly to the Konsepti and Ligne Roset studios, which are the basis interior design.” The new construction of the house won 3rd place in the housing construction category in the Karel Hubáček competition for the building of the year in the Liberec region 2021.