FARMINGTON, MN (FOX 9) – The Brosam family moved into their new home in Farmington four months ago to make way for three siblings they officially adopted last month. Last week, a fire at their home destroyed almost everything they had.

On Wednesday morning, Travis Brosam said he didn’t notice anything different as he worked to get his two youngest boys to the bus stop and drive his 16-year-old daughter, Amanda, to school. Minutes after he left, his wife Amy came home from the gym and noticed a “funny smell” in the house.

The Brosam family moved into their new home in Farmington four months ago to make way for three siblings they officially adopted last month. Last week, a fire at their home destroyed almost everything they had.

“There was black smoke coming out of the vent, so I went to call 911 right away,” Amy said.

Their 14-year-old daughter, Lily, was also at home and fled the house after discovering the smoke.

“All of a sudden my mom called me to go to her room and I saw smoke coming up,” Lily said. “I just didn’t know what was going on so I just walked out of the house.”

Travis explains that the family would later learn that there was a hole in the gas line to their clothes dryer. The gas made its way into their basement utility room where it met the furnace and started a fire.

The fire and smoke ripped through the house’s ventilation system, sending smoke and soot to every room in the house, forcing firefighters to knock down walls, punch holes in the ceilings and destroy most of their property with smoke or water damage.

“You realize very quickly that you literally have nothing,” Travis said.

Just four months earlier, the Brosam family had moved into their Farmington home to make room for three siblings they were adopting. In April, 9-year-old Eddy came to live with Amy, Travis and their daughter Amanda. When the Brosams decided to adopt Eddy, he asked if they would also adopt his sister Lily and his 8-year-old brother Ruben. Travis and Amy said “sure” and decided to turn their family of three into a family of six. 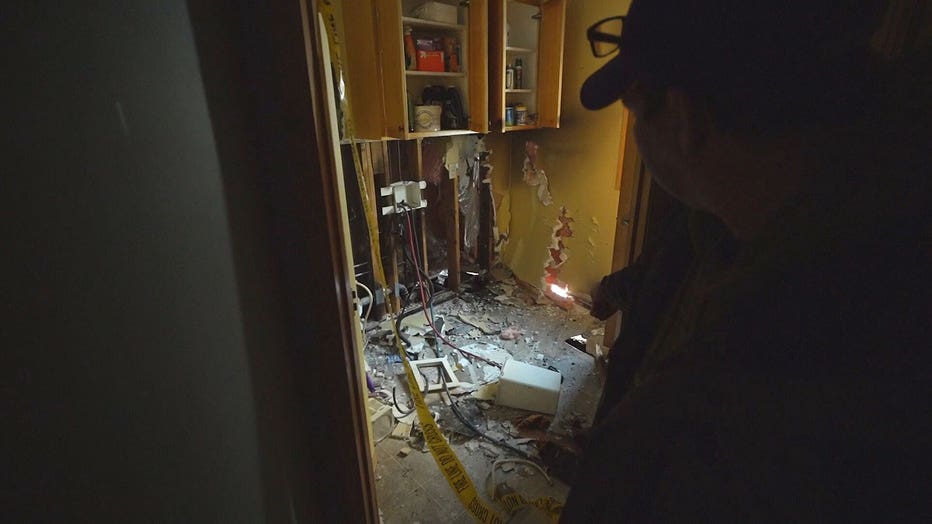 Some of the damage inside the Farmington family home. (FOX 9)

The adoption was finalized by the court just 30 days ago. Amy and Travis had taken time off to spend with their new family over the holidays. Then, unexpectedly, their house was destroyed.

Now the six family members and two dogs live in two hotel rooms in Apple Valley while they try to get back on their feet. Everything they have with them was bought new or given to them, but they are still struggling to meet their basic needs, let alone make this first Christmas together special.

“Kids all want to go play with toys like man, I’m sorry you’re out of toys. What you have is in this room.” Travis said.

The Brosams hope to find a more permanent location in time for their first Christmas together.

A family friend set up a GoFundMe page to help the Brosams.