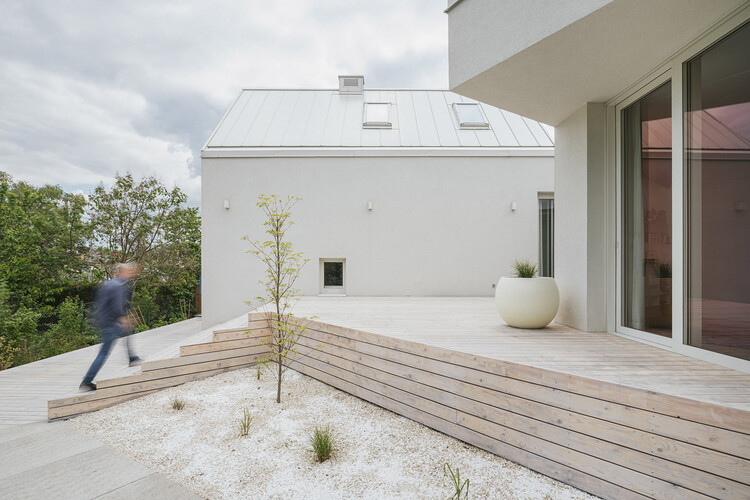 Text description provided by the architects. A plot with a southern entrance from a city street, overlooking greenery and the “Iławka” river. The house has an entrance through an interior patio. This building was designed to make the most of daylight. It’s modern, but at the same time very warm and family-friendly.

The house was built in the city center of Masuria. The investor decided to buy this land because of its location by the river, but also because it is easy to carry out daily tasks. However, when starting this project with the IFA group, the main guideline was to open the house towards the river

The surroundings of the plot are quite specific. It is surrounded by apartment buildings and single-family homes of various shapes and proportions, built in the 1960s. A typical setting found in small towns. The house had to be different from the others and at the same time integrated into the environment. This design is distinguished by its shape and white color. However, its form is justified by the function and specificities of this place.

The house was built on a narrow lot with a southern entrance from the street that ends in a view of the river from the north. These are the elements that determined the location of the house at the end of the plot. Thanks to this, investors can immediately drive the car into the garage. Between the garage and the house, a south patio has been created, which is an extension of the living room. The house took the shape of the letter V. This is how the idea of ​​the whole body was born.

The exit from the living room leads to the patio located in the southern part of the plot, while from the dining room the residents overlook the northwest patio. Both are placed in such a way that passers-by cannot see what is going on inside. The house is open to the environment, but at the same time, the privacy of its inhabitants has been preserved. Light plays an important role in this design. The architects of the IFA Group took care that the house was not overheated, but at the same time remembered that the rooms inside were properly sunny.

This project shows that on small plots it is possible to implement modern and practical projects with a variety of spaces for household members. Although the house is located just off the street, it creates an intimate space for investors.